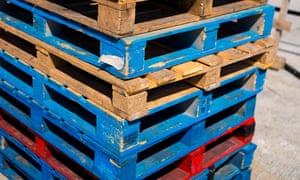 The government is holding talks with distributors after realising that the UK has a dire shortage of the “right sort” of pallets to import and export goods in the event of a no-deal Brexit.

The Department for Environment, Food and Rural Affairs (Defra) will on Tuesday hold meetings with distribution industry representatives about how to keep household goods moving to and from supermarkets if the UK crashes out of the EU next month.

If the UK leaves the EU without a deal the overwhelming majority of wooden pallets, used to transport a vast range of consumer goods from breakfast cereal to pet food, beer and chocolate, will not meet strict EU rules designed to stop the spread of bark beetles and other pests.

If the pallets are prevented from transiting between the UK and the 27-country bloc, the millions of tonnes of goods they carry will not be able to be transported which could potentially lead to food shortages. More than 3m pallets move between the UK and EU every month.

The UK government has told distributors that all timber packaging, including pallets, destined for the EU countries after a no-deal Brexit must be heat-treated or fumigated to comply with International Standards For Phytosanitary (Regarding Plants) Measures 15 (ISPM 15). At present pallets moving between EU member states, including the UK, are exempt from the ISPM 15 standard. Industry experts said fewer than a third of the pallets used for EU-UK trade comply with the standard.

“In the event of no deal, all WPM [wood packaging material] moving between the UK and the EU must meet ISPM15 international standards by undergoing heat treatment and marking,” Defra said in an official notice last week. “All WPM may be subject to official checks either upon or after entry to the EU.”

The notice sparked concern among distributors and hauliers who asked for a meeting with officials. Business Insider first reported details of the meeting due to be held on Tuesday.

A spokesperson for Defra said: “We have been meeting weekly with representatives from the food and drink industry for many months to help prepare for all scenarios as we leave the EU.

“As part of those meetings we have discussed a range of issues relating to the import and export of our goods, including pallets. We have already committed to retaining our current pallet import approaches post-exit, and we hope the EU will confirm that it will reciprocate our commitment.”

Chris Hillaby, the managing director of Shaw Pallets, a Huddersfield-based pallet producer, said the issue was “one of those really nasty things that Brexit has thrown up”.

“A global initiative commenced over 15 years ago within the forestry and timber packaging market has been focused on stopping an invasion of plant pests that can prove very damaging to our indigenous timber stocks,” he said.

“Around five years earlier, it had become apparent in the US that plant pests could be transported in lower-grade softwoods, which were used in some items of timber packaging where the insects, such as the Asian long-horned beetle, could sometimes be found under sections of bark on the timber.

“To prevent such trends the World Trade Organisation (WTO) agreed that all timber packaging should be heat treated at source to a core temperature of 56C and sustained for at least 30 minutes as this had been scientifically proven way to eradicate such threats – the treatment standard being called ISPM15.”

From The Guardian Online